‘Our kitchen extension went over budget but the result is priceless’

‘Our kitchen extension went over budget but the result is priceless’

Patricia and Tom McDonagh opted for a bold renovation of their Portmarnock home.

If Patricia McDonagh has a claim to fame it’s that she once advised Dermot Bannon to steer clear of a career in architecture. She was a guidance counsellor at Malahide Community School where Bannon was a pupil dreaming of amazing houses. Later she became principal. She and Bannon joke about it now, and these days she’s a huge fan of Room to Improve. She and husband Tom are enthusiastic renovators: over the years they’ve continually updated the Portmarnock home they purchased back in 1977 as newly weds. But the lure of a big renovation job beckoned.

By the time she retired in 2017, Patricia was determined “not to grow old in an old person’s house”. The kitchen was beginning to look old-fashioned and dated. “We had always kept the house up to date and started looking at how we might open up the space.” The couple had a budget of about €60,000.

She signed up to Pinterest and did several Simon Open House consultations where architects showed her, using the original plans of the house, how to make changes to the layout by placing tracing paper atop the plans and redrawing the lines of the room.

Visiting the Ideal Homes Show she came across NuHaus, a one-stop refurbishment shop set up by Lithuanian Vilius Cesiunas in 2015. In terms of budgets she felt the firm was talking the couple’s language. “It was refreshing to meet a firm that could talk figures. ‘We can do this for €60,000,’ they said.”

She had spoken to one or two other kitchen providers at the show and found them to be “sniffy’ about her budget constraints.

After an initial conversation with NuHaus she realised that “we didn’t really need any more space but rather needed to reconfigure the space we had so that it worked for us”.

As the firm offers a complete service, from initial design drawings to the supply of engineers, builders, tilers, plumbers, electricians and carpenters, they didn’t have to get tenders in or chase builders, she explains.

A start date was set, the McDonaghs turned their diningroom into a temporarykitchen and the builders arrived on site. The original NuHaus estimate went over budget. Instead of the €60,000 quoted, the job cost €80,000, including VAT, but factored in additional requests made after the original quote. 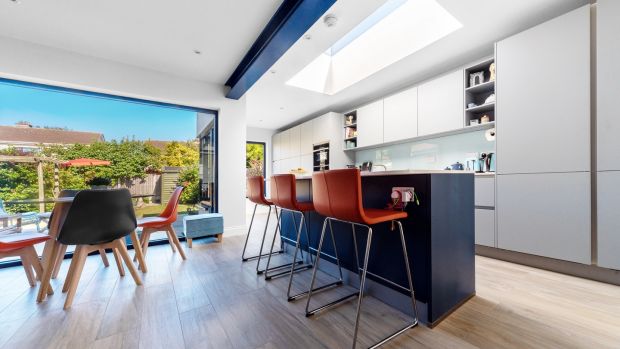 These included a new internal high spec door, a new kitchen that cost €26,000, rewiring to accommodate the underfloor heating, the flooring, building labour and design fees as well as external landscaping and paving. The firm replaced the roof over the garage part of the kitchen, gratis. The same kind of job, about 28sq m in size would now cost €75,000-€90,000, incl VAT, says a spokesperson for NuHaus.

It was NuHaus that suggested installing electrical underfloor heating. “If we had gone for piped underfloor heating it would have elongated the build-time – there would have been three weeks of drying out time for starters,” McDonough explains. A decision to lay porcelain wood-effect tiles underfoot takes the chill from the floor and the luxury costs about €1 a day to run, Tom estimates. It allows the couple to pad about in their stockinged feet. The space is now so well insulated that the couple spend much of their time in just T-shirts.

The Kube kitchen has smart units in a deep marine blue of the nearby sea, the same colour that an exposed support beam, a rolled steel joist (RSJ), is painted. A long roof light beams natural light onto the worktops and island.

Across the room an upright metal plate has become a place for some of Patricia’s extensive magnet collection from their travels across the world, with passport stamps of everywhere from Nepal to New Zealand.

The couple has a separate dining room where the family eats when they’re all together.

The job was delivered within 18 weeks. It started in January and was finished by mid-May. The project was delayed about 10 days, Patricia recalls. “Like every episode of Room to Improve we were waiting on the windows.”

But what they got was, she says, “so worth the hassle”.

“Gone was our dark kitchen with high windows and a wall that ran halfway up the room from the original garage conversion. What we have now is a big, bright, wonderfully insulated open room with floor-to-ceiling windows which bring the garden into the house. A skylight that lights the interior of the room and a painted beam holds up the walls, adding character to the room. They even built us a magnet wall to compensate for the fridge being integrated!”

In their 40 years in the house they estimate that keeping the place up to date has cost about €150,000, including the recent big job.

The rear of the house

In the 1980s they converted the garage so that it became part of the kitchen with a dining area hived off it by a horizontal half-wall. A glass room to the rear became a utility.

Over time they invested in new double glazed windows but not before one of their au pairs, a Swede used to highly engineered windows that could keep out any sort of cold and wind, wrote an account of her Dublin experience for a Swedish newspaper that described how cold the house was when you stood or slept near the windows.

In the 1990s they converted the attic. Tom, a model aircraft hobbyist, wanted a room for his toys. In the noughties they installed a downstairs shower room and guest wc.

Does it still feel like home to the kids? It is different but her son, Ross, and daughter, Sarah, agree that yes it does.

“Anything we’ve done to the house is to improve the quality of our home and that to us is priceless.”