Shane Kirby and Brian Gorry lived in a perfectly fine three-bedroomed semi, but the problem was where to accommodate the country cousins when they arrived. Their clever solution includes a secret hideaway and lots of colour

Shane Kirby had no problem with that when he came to Dublin from Cork in 1999. Originally from Ballincollig, he had got a job as cabin crew with Aer Lingus and he wanted to be near his job, so he only looked in one area – Swords, which is minutes from the airport. In fact, so paramount was location as a prerequisite that once he saw a house in the area, that was it – he bought it. “It was the first house I viewed; the only house I viewed,” he says. “My parents both have their own businesses in Ballincollig in Cork. They both said, ‘Get your foot on the ladder immediately’.” Shane adds that his mother, Eileen, had her own shoe shop, while his dad, Tony, who used to be a showband musician playing guitar and fiddle, has a recording studio. “They went guarantor, and I got a mortgage. It helped that it was slightly before the Celtic Tiger; I couldn’t have done it otherwise,” Shane, the middle of three boys, adds.

The house in question was a three-bedroomed semi-d in a residential cul-de-sac, but Shane and his partner, Brian Gorry, have so completely transformed the house that it almost looks custom built, and, in a way, it is.

However, they didn’t do anything until last year, after they had both travelled extensively and formed clear ideas of what they wanted in a house. And a lot had happened to both of them in the intervening 16 years. 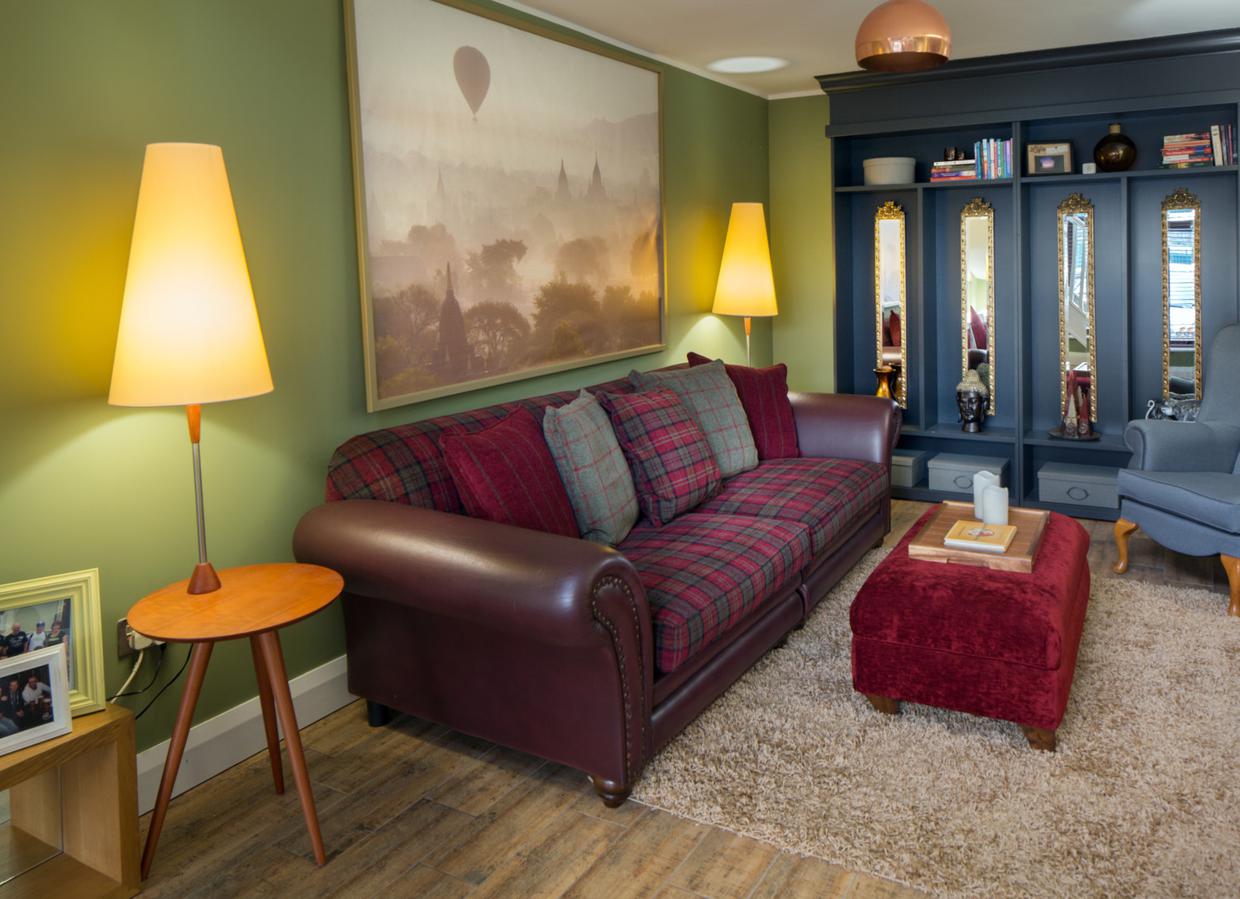 Two years after Shane bought the house, 9/11 hit, which affected air travel enormously. Staff at Aer Lingus were encouraged to take unpaid leave, so he spent a year in Australia with friends. Shortly after his return, in 2003, he and Brian met. “We met in The George,” Shane says with a laugh. “Funnily enough, we wouldn’t be people who go to The George often. I went with a gang, including a friend, Leah, who has a regular boyfriend, and she wanted to go to a place where there wouldn’t be guys after her. I spotted Brian straight away when I went in. He got chatting to Leah, he was spotting me at the same time and Leah noticed, and said, ‘Is that my friend you’re looking at? I’ll introduce you’, but Brian ran away,” Shane reminisces. Brian adds, “I did, I got nervous, I said ‘I’m outta here’, but anyway I came back and I asked Shane for a light – you could smoke then – and we got chatting and that was that.” Brian explains. They both muse that the smoking excuse was a useful device as a chat-up line. Interestingly, they both gave up smoking once they got together.

Brian moved in shortly after, and they’ve been a couple ever since, enduring some turbulent times together, including redundancy for Brian in 2008, when the garage he worked in closed, but it led to a job as a greenkeeper in a golf club, which he loves. “What happened was I got a job working in Ballincarrig golf club, through Fas, three days a week. I took it to get me out of the house. Then Fas asked me would I be interested in doing a course in greenkeeping, which involved two years study. I said, ‘Yeah’ and did the two-year course. Then, literally, on the 21st of April, I passed all my exams and, on the 22nd, a lad who was there 19 years handed in his notice, and I landed on my feet,” Brian notes, adding that the job involves maintaining the greens, and checking for disease among the plants and trees. It’s not so surprising that it suits him, as his father, who had been in Bord na Mona before he retired, is a keen gardener. “It’s never what I thought I’d do, but I had to reinvent myself after the recession. It’s outdoors all the time, lots of variety; I love it.”

Worse was to come for Brian, who’s the youngest of four, with the loss of his beloved mother Eileen, who took her own life in 2010. “She was 59. It was tragic,” he says. “And the mystery is it was a joyful time. My sister Fiona had battled cancer twice, and was told she’d never have another child. She had one daughter, Kelly, then 14, but to everyone’s amazement, she did get pregnant,” Brian explains. “Her second daughter, Fia, arrived within months of Fiona being pronounced clear of cancer. It was the night of the christening, we were all still in the pub; my mam had been in the pub with us. She’d been drinking tea; she’d been in great form, then she said she was tired and going home to bed. And she was in bed and all. My dad was in the kitchen, and he saw her pass by on the way, going to the garage where there was a washing machine, and she didn’t come back out. My dad thought, ‘What’s keeping her?’ and he went out and found her. She had taken her own life.” Brian recalls with some difficulty, “She was never depressed; she had called my sister around a quarter to 11 and they were chatting. She said, ‘We’ll go in the morning and we’ll pick up paint and rollers and we’ll paint the kitchen on Monday’. My sister said, ‘Yeah’, and by a quarter past 11, Mam was found dead.”

Needless to mention, the years in the aftermath of Eileen’s death were hard. “It was tough for all of us, Brian recalls. He says, “What doesn’t break you, makes you stronger. My dad gets on with it, and he has my two sisters living near him. I was lucky, I have a great partner.”

It took Brian a while, but happier times were to come, and two years ago he and Shane decided to finally renovate the house the way they wanted it – they love having their parents to stay, as well as their siblings with their children.

The great thing was the house – dating from the 1980s – is on a corner site, so they had plenty of room to add a two-storey extension to the side. 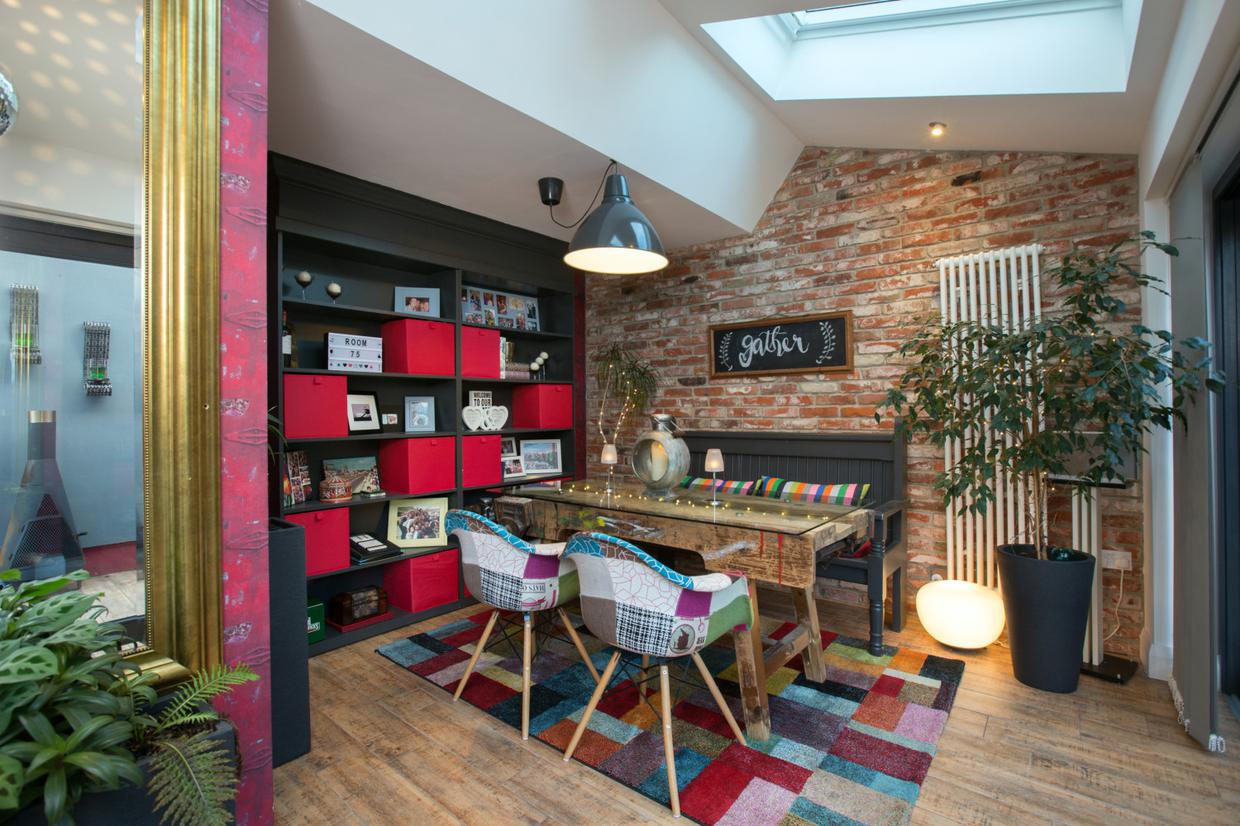 This bright yet cosily furnished dining area is new; the couple love to upcycle and the old bricks, which are from Poland, are sliced in half and treated so that they adhere easily to the walls. The floor is covered in wood-effect tiles. The bookshelves conceal sliding doors to the den.The dining table is an old workbench covered with custom-made glass

They found Christopher Boylan, architectural designer and owner of Plantech, on Facebook, and gave him their brief. They wanted to increase the size of the kitchen, and create a separate little apartment – a bedroom, en suite and den, for visiting family and friends.

Christopher brought building company Nuhaus on board to do the work according to his designs, and the couple are thrilled with the result.

The front living room, two of the bedrooms and the original bathroom remain virtually the same, but the kitchen is twice the size, with a special space for the third member of the family, Minnie, the tiniest miniature Yorkshire terrier imaginable. The kitchen now also has tons of light, courtesy of a wall of glass to the back. A dining area has been added and the guest apartment is accessed both from the hall and from the dining area – bookshelves slide back to reveal the den, and there’s a staircase in there leading to the light-filled bedroom en suite above.

Once the work had been done, Shane and Brian added their own personal touches, which includes big splashes of colour, and lots of retro furnishings and souvenirs from their trips all over the world. Collages of photos from their travels hang on many of the walls – Nashville with Shane’s parents is a favourite location for holidays.

Since they’ve done up the house, they still love to go away, but they say they adore coming back home – their favourite location of all. 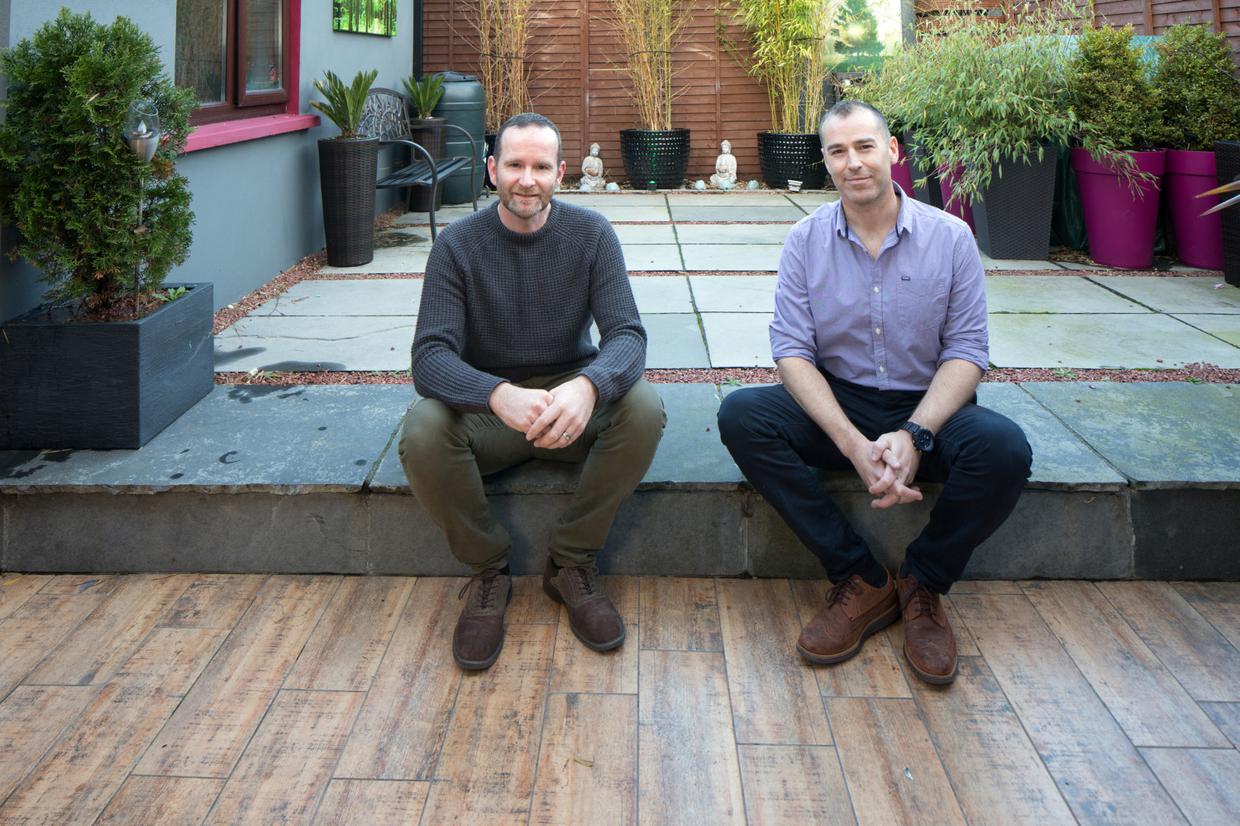 Brian (left) and Shane in their garden. The wood-effect tiles are continued from indoors to the outside, while the building on the left of the photo is the former garage, now the utility room 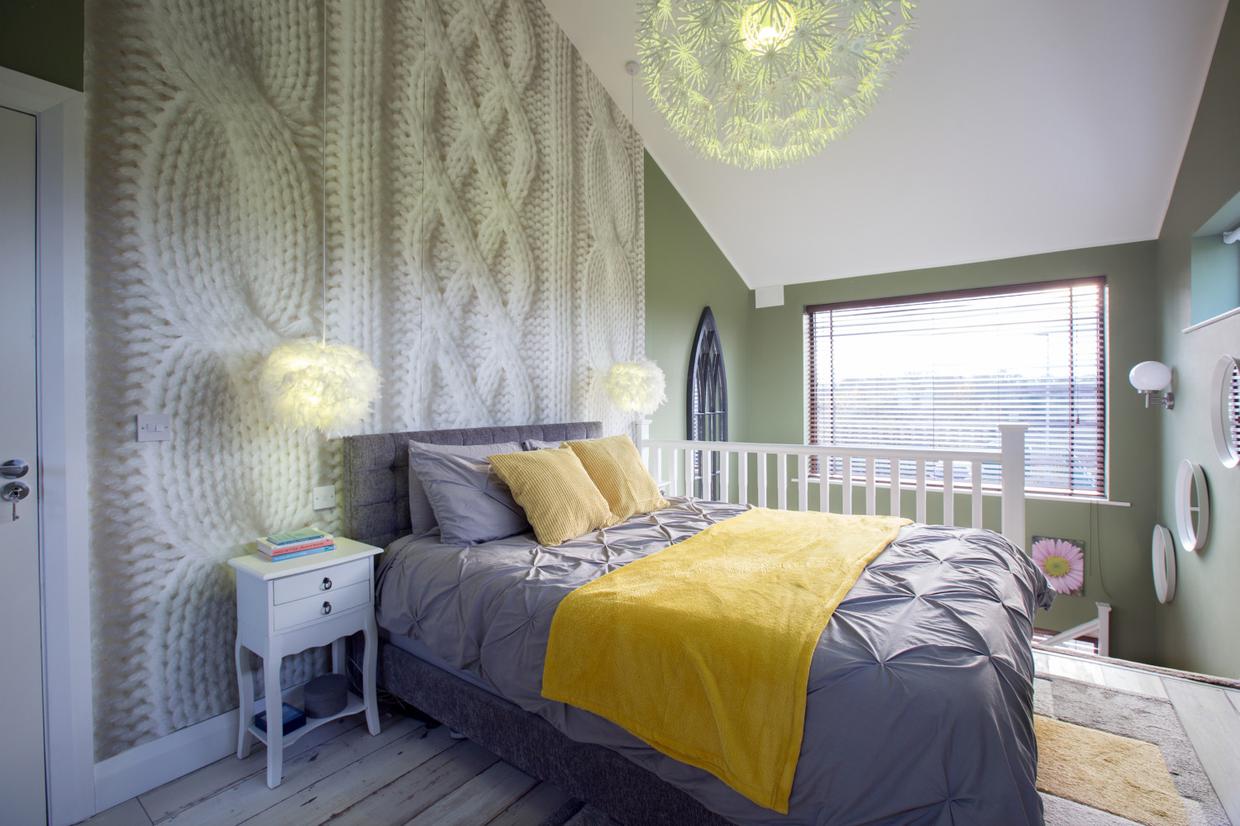 The new bedrooom is over the den and has a slanted extra-high ceiling for maximum light. Christopher Boylan of Plantech did the design, and Nuhaus did the building work 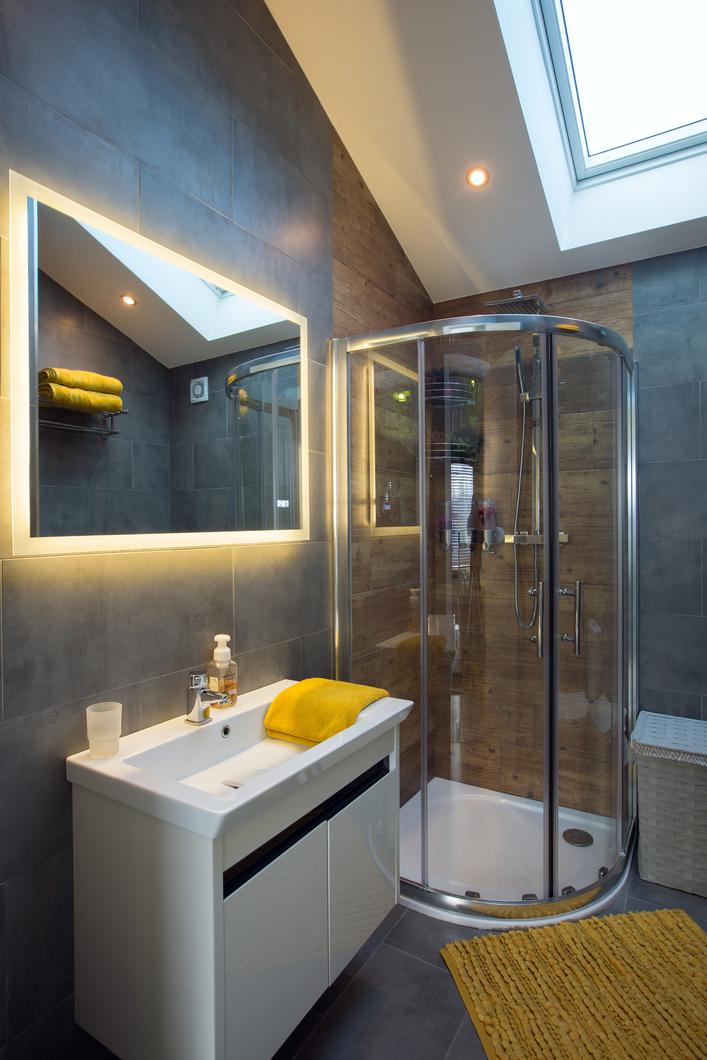 The shower area is lined with the same floor tiles as the kitchen and dining area. “Vilius the builder thought we were mad, but he liked them in the end. I think it makes the shower look like a sauna,” says Shane, adding that it’s great to see his and Brian’s ideas coming to life 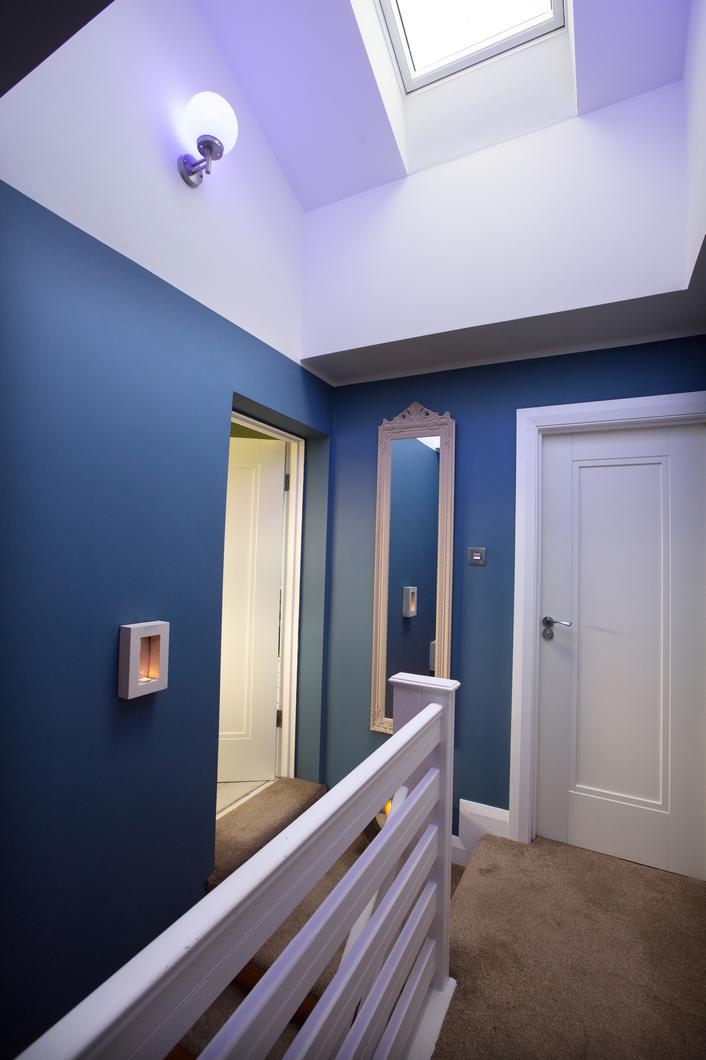 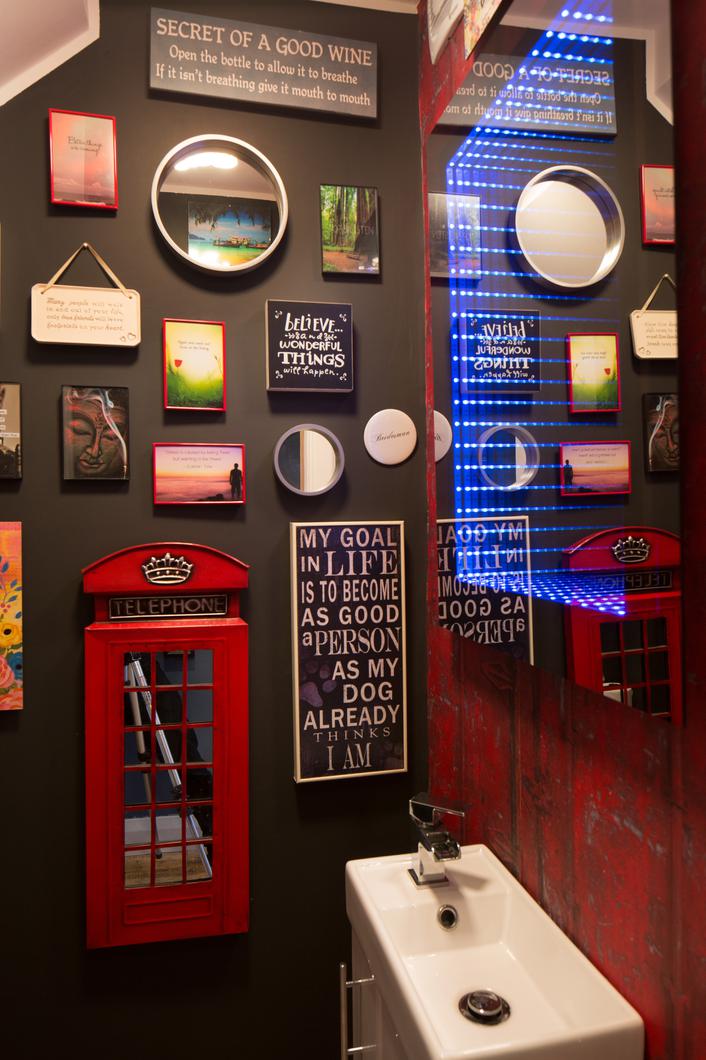 In the new downstairs bathroom, the couple have decorated the walls
with motivational sayings. Shane and Brian’s favourite is ‘Enjoy the little things in life, for someday you will realise that they were the big things’